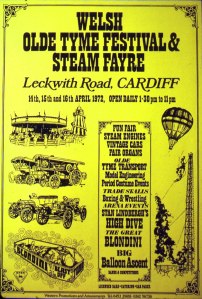 Back in 1972 my father was asked to display this poster in his shop in town, in return, as was common practise in those days, the promoters gave him two free tickets to the first day of the show. The poster was impressive, at least, I thought it was and imagined the atmospheric scene even though I had never been to such an event. Back in those days my work was my life; everything I did revolved around my job at the holiday home near Cowbridge which catered for children with various degrees of disability, most of my friends of the era worked there, I even lived there in a cramped little bedsit. So it was no surprise that I should wish to take my best friend and colleague Margaret to share in the experience of this advertised spectacle. Getting a day off together was a bit of a performance as we both had busy roles in the establishment and staff would not normally have been given time off together in the week. 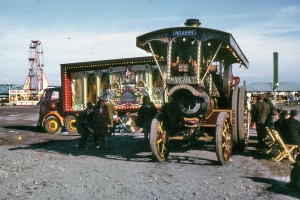 The day eventually arrived and we set off after lunch to experience the festival arriving to an nearly empty car park on a barren desolate pitch on the outskirts of Cardiff. Looking back over the few photographs I took I guess there were about ten traction engines, maybe a few more, and a number of strident fair organs; the fair was there but not operating at that time of day and there were certainly no vintage cars. In addition none of the advertised performances were going to take place, they were for Saturday and Sunday only. In all, it was something of a let-down and disappointment, the poster had been so promising! The photograph shows one I took at this event and one of the very first I ever took at a steam rally, little did I know then I was to take thousands at such events during the next forty years!

A couple of years later I happened to see an advert for a steam rally at Doddington near Bath so, hoping for a better experience this time, decided to attend. This time the visit was much more pleasant and I snapped loads of photos during the time I was there. I was also rather interested in the long line of vintage stationary engines spitting and banging together in a wonderful cacophony of sound accompanied by the strange mix of oil, petrol, diesel and paraffin fumes.

A year later, early in 1975, I was assisting my grandfather clear up all the building materials and equipment that had accumulated in his garden, he had retired a year or two previously and much equipment from his builder’s yard in Coity Road had been moved to the back garden. In amongst all this stuff was a small engine which I remembered he had used to drive a portable saw bench. My mind flashed back to the previous year and recalled the line of stationary engines so, rather than send for scrap, I kept it. Over the coming weeks I dismantled it and gave it a repaint and soon had it running again; I also constructed a frame on which to display the engine. At this stage though I had no thoughts on showing this anywhere or why I had actually spent so much time on this project. 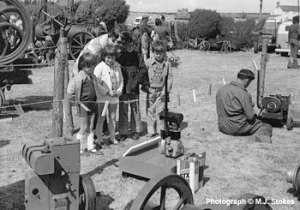 In the summer of 1975 I happened to see an advert for a vintage show to be held at Southerndown so went along on the Saturday for a browse. There I met someone I knew who was chatting to the organiser of this event and I was introduced; I casually mentioned I had one of those at home whilst pointing to a small engine putt-putting away to itself, at which the organiser said “It’s no good there, bring it here tomorrow”, so I did. This photo shows a family looking at my engine and reading the history board I had hastily but carefully sign-written the evening before. That very first time led to all sorts of adventures and with my very limited 1970s careworker’s budget managed to acquire a few more machines over the next year or so;  twenty years later I had so many it was becoming difficult to store such a collection.

The years pass, forty years on from my first encounter with a traction engine and I’m still just as interested but in a very different way. I guess it’s nostalgia now for the way of life I led for a good number of years, attending shows most weekends from April to October which I kept up from 1975 until 1985 after which I began to slow down a little. Now my large collection of engines and machinery is mostly dispersed and sold on to other enthusiasts and although I haven’t exhibited at a show for nearly twenty years I still have this yearning – I blame that poster!