I was standing at the foot of a large staircase, silent tears that I was desperately attempting to suppress were rolling down my cheeks; my suitcase and trunk were at my feet and my parents by my side. Slowly the queue in front of us diminished as one by one the new boys in front of me were admitted to my new school, a boarding school.

I was eleven and had failed the 11-plus examination, I was now labelled by the education system as a no-hoper and destined for the local secondary modern school which had a bit of a reputation at that time for the roughness of its pupils. Now I was a timid, withdrawn boy and my parents felt it would be better for me if I could be educated privately. They did leave it a bit too late though and as we visited the three local schools which might have been acceptable to them for my education, it was not an easy process.

The obvious and first choice was Summerhill, but they had a large intake already and couldn’t accept me as they had no more room but would put me on the waiting-list. So off we went to the next, Bryntirion Boys Preparatory School, they had vacancies but we wanted to look at the other option first which was St John’s Preparatory School in Porthcawl. We visited St John’s but it really was much more expensive than Bryntirion so back we went to take up a place there only to be told they no longer had any day-boy spaces available, but I could become a boarder. My parents weighed this up and decided, as my father had been to boarding school at my age and earlier, it could be good for me so agreed I should attend this school.

And so it came to pass in September 1960 that I was waiting in the queue to be admitted. There was one boy I recognised from Oldcastle School and he too was ‘piping his eye’ whilst waiting. Eventually the time came and we were called in; all to soon I was being placed in the charge of a heartless older boy detailed to settle me in. I guess he didn’t like the idea that he’d been given a tearful wimp to oversee the first few days and he was less than helpful. Fortunately a little lad came up to me and offered his sympathy for which I was grateful, he said it was his first day too, but he was tearless, I guess he considered this more of an adventure than a sentence. He remained friendly during my very brief period at this school but the boy I got on really well with was the one who I knew from Oldcastle School and we became best chums.

There’s no doubt the school was run on a budget, we had the same three or four teachers covering every subject plus a part-time teacher especially for Latin. One of the teachers was also a housemaster who looked after us in after school activities, his wife was deputy matron. The head did very little teaching, he had a tongue which could rip you to shreds and we boys were very fearful of this being inflicted upon us. His wife was the matron, a kind person who looked after our personal care and needs. I don’t really recall, but I guess there were about 40 boys boarding and perhaps another 20 coming in on a daily basis. I’m basing this figure on contemporary photographs and personal knowledge of how many dormitories there were and how many boys in each. I was in the largest dormitory on the ground floor with 12 boys. The photograph shown here (courtesy of Louvain Rees) was probably taken about ten years before my time in the school, but does show some of the teachers and staff responsible for us during my period of attendance. I will say that although strict discipline was kept at all times, there was never any physical punishment and bullying was not tolerated. I can’t vouch for the standard of the education as I wasn’t interested in learning, but I guess many pupils achieved academic greatness from their time there.

Probably the worst aspect of daily life which I may be recalling with distorted or exaggerated memories, was the morning washing ritual. Every dormitory in turn would use the one and only washroom for basic cleansing duties which would be a quick face and neck wash followed by the cleaning of one’s teeth. There were just two basins in the washroom for this but, boys being boys, usually this was no problem as washing was often dispensed with, we were not supervised. What made this ritual most unpleasant though was the single toilet bowl in the corner of the room which by the time our dorm of younger boys arrived there it could be absolutely foul. Very often half-full to the brim with many boys’ offerings, not only liquid, but excrement of every hue from mustard yellow to dark-chocolate brown, some of which had inevitably managed to get on the seat or on the floor and trodden in; boys used this vile skid-marked stinking receptacle whilst others were in the room, not only for urination, but bowel evacuation too with all its associated sounds and aromas. When you entered the washroom you’d refrain from catching the eye of any unfortunate soul who out of desperate necessity might be squatting with a gritted-teeth defecation grimace for fear of embarrassing him or yourself. If anyone dared attempt to use the flush it usually ended up with the contents rising to the edge of the brim before the excess water slowly seeped back through the solids rearranging them as it dispersed. Boys also had to ensure their pyjama trousers weren’t dragging on the floor or you’d very likely take some of the washroom floor’s contents back to the dormitory with you. It really was a disgusting experience and for years afterwards I associated the smell of a certain brand of toothpaste with the memory of that ghastly washroom. I usually held onto my bodily waste products until after breakfast when I could use the toilets in the school changing rooms, which were somewhat less of a challenge, although this very often nearly led to a wetting of the pants in my subsequent urgency to relieve myself. I had a particularly weak stomach, so it’s just possible I’m remembering this as far worse a situation than it actually was, let’s hope so!

There are so many other details of my time at the school that I’ve forgotten, I only stayed for a term before I was transferred to Summerhill School where a place had become available and where I could once more live a normal life at home. There are a few events I vividly recall, one of which was the day of the big flood as discussed yesterday on this blog, two other events, both associated with the run-up to Christmas, will have to wait for another day! 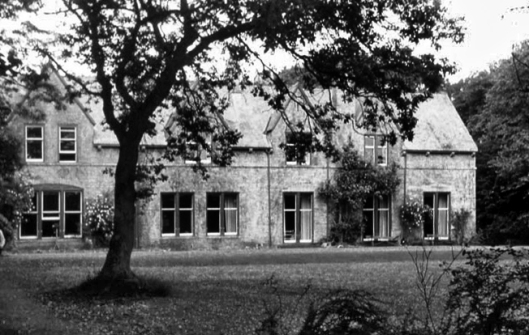 This is the view from the rear of the school which overlooked the grounds and playing fields. The three ground floor windows on the right of the building were the dormitory where I slept and the next two windows were the smaller downstairs dorm. The ground floor window with the curved top was our dining room. The upper rooms in this section were used for staff accommodation. A newer extension had been built on to the left end of this building which housed three dormitories on the upper floor and four classrooms on the ground floor. The photo shown here was taken in the mid 1960s after Bryntirion School was sold and Summerhill School had purchased it. Photo courtesy of Tony Dare-Edwards who donated it to the Summerhill page on my website.

19 thoughts on “The washroom (not for the faint hearted)”