There was a knock at the front door, followed by the strident sound of a piano accordion being played; badly. There were wrong notes in the melody, incorrect chord buttons, stumbling, incorrect timing, in truth it was an appalling cacophony. 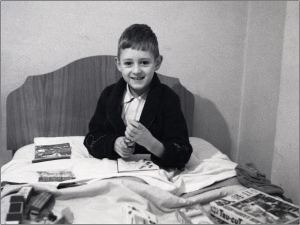 It was quite early on Christmas morning, the day had started much earlier in the Stokes household with the usual stocking at the foot of the bed which the annual overnight visitor had mysteriously placed whilst we slept. It was the late 1950s so I would have been less than 11 years of age and my brother and sister, three years and six years younger respectively. Our father groaned when he heard Good King Wenceslas being murdered with inappropriate harmonies and we could see he was also a little irritated at being disturbed on the one magical morning that was Christmas.

Well, we could either ignore it, or face up to the stranger at the door and Dad chose the latter. There in front of him stood a person wearing the most appalling clothes, torn and threadbare, an old hat pulled down across his brow and a pair of dark glasses indicating the person was probably blind. He didn’t say anything when the door was opened but just shook a tin which rattled, indicating there were some coins in at least. Dad reached into his pocket and brought out a coin and placed it in the tin in order to get rid of the apparition that was interrupting our festivities.

The tramp then said, “Thank you John, and a Merry Christmas to you all” and removed his dark glasses showing it to be our neighbour from up the road playing a Christmas morning prank. We enjoyed the joke but thereafter my Father felt guilty whenever the event was recalled, why, I hear you ask?

Well, the coin he had placed in the tin was a sixpence and he felt on reflection that it was not a very generous donation to a down-and-out person, his annoyance at being disturbed must have dampened the festive spirit and he was rather ashamed at his miserly offering; sixpence back then is worth about 46 pence in today’s value. Dad always felt that our neighbour would have thought him really miserly at only handing over a sixpenny piece. Our neighbour on the other hand could actually play the accordion quite well and his appalling rendition of the Christmas tunes was all just part of his act! He caught out a number of other neighbours that morning as well although there is no knowledge of how much they placed in the tin!