Costs relating to transfer of business:

Several attendances upon you, and upon Mr W A and W H Stokes discussing terms of transfer of business in detail, including consideration of the question of income tax etc. by way of instructions for preparation of necessary deed between yourself and Messrs’ W A and W H Stokes.

The introduction to a long and involved invoice to transfer the business of Stokes & Sons from my great grandfather H J Stokes to his two youngest sons Wilfrid Arthur (my grandfather) and Walter Henry the youngest. At this time HJ’s four other (surviving) children had all moved away from Bridgend, three to the Essex area and one to Canada. It would appear that all my grandfather’s sibling were agreeable to the transfer, or at least tolerated it. 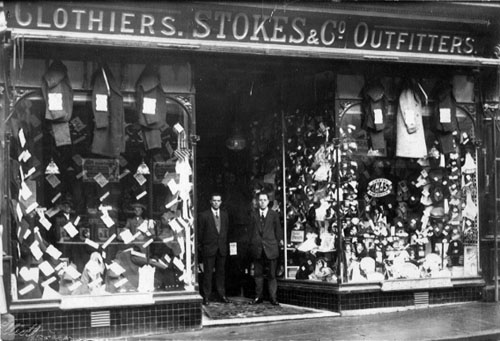 My grandfather and his brother shortly after taking over the shop.

The trouble started when my grandfather bought his brother’s share of the business leaving him as sole proprietor; very briefly, his other siblings, at least the ones in this country, also then wanted a slice of this cake and demanded their share of the business which was fought legally. As a consequence of this my grandfather suffered a nervous breakdown which lasted for the rest of his life. Nowadays this depression would be easily treatable, but my poor grandfather spent many a long while in a “Nursing Home”. My grandmother, who was besotted with my grandfather, spent much of her enforced lonely life writing to him, and he to her, the majority of those letters remain in the family archive.

The business carried on with the help of a manager through a period in the mid 1930s of near financial ruin, until my father became old enough to take over the reins. A formal partnership between my grandmother and my father was arranged upon the death of my grandfather in 1954 and this was amended in the late 1960s when my grandmother handed the business over to my father. The business continued until 1980 when the 125 year lease was due for renewal and the landowners decided not to continue the lease under the existing arrangements whereby rent increases were indexed according to the rise in the cost of living. Suddenly my father realised he was faced with the prospect of not being able to afford the substantial increase the Dunraven Estates were imposing so he sold the remaining five years of the lease, retiring in 1980.

2 thoughts on “The seeds of trouble!”