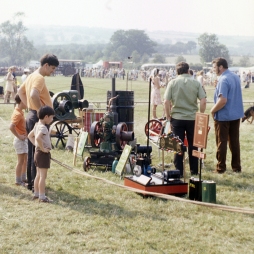 During the first year of exhibiting at vintage rallies in 1975 I ‘gatecrashed’ a few events. As one usually had to book exhibiting space months in advance I was too impatient in that first season to wait until the following year to show my engine, so would just arrive at a rally and enquire whether there were any exhibitors who hadn’t turned up and could I fill their space? It never failed, and even if it had there would have been no loss as I would probably have visited the show anyway. The first photo shown here was at such an unplanned show at Much Marcle in Herefordshire on a hot July weekend in the summer of 1975. My souvenir plaque board has just two plaques so this was my third show as an exhibitor, not all those I ‘gatecrashed’ gave me a plaque!

In 1975 everything was so simple, as previously mentioned I had begun exhibiting in the summer of that year. My first engine, a diminutive J.A.P. running a 12v dynamo, fitted easily into the back of my tiny 600cc Citroen Dyane car and along with a small tent, a sleeping bag and a few provisions I could easily slip into a quiet corner of the exhibitor’s camping area and enjoy a weekend in the company of my new-found friends. This little engine served me well for the first season and partway into the second but it was soon necessary to purchase a car capable of towing a trailer as I was aspiring to greater things.

My plaque boards and negative/slide files indicate I exhibited at seven rallies in 1975 with my first engine, they were at Southerndown, Ffynnon Plant, Much Marcle, Mitchell Troy, Fairford, Eastnor and Llandow, I have photos of my engine at all of these events, in those early days I liked to capture my engines with the visiting public in shot as well and some from my first season are shown here. 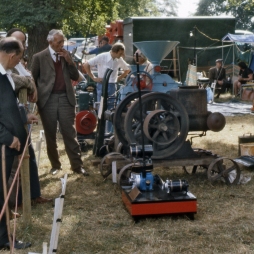